In hindsight, there were clues something was amiss, said Texas A&M University at Galveston student Stratton Muhmel ’14 ’18 of struggles he encountered during graduate school. Writing research papers seemed a herculean task, his thoughts meandering under the weight of words that wouldn’t flow.

“I made frequent visits to my department chair, trying to get my mind straight on what I was supposed to be doing, but I couldn’t translate her words into my actions,” recalled the William Paul Ricker Memorial Scholarship recipient.

“I was making mistakes at my internship too,” Muhmel added. “I chalked it up to the crazy pace of graduate school and work.”

In December 2018, Muhmel blacked out and collapsed at his logistics internship at Houston’s Allyn International. Within 24 hours, neurosurgeons at Houston’s Memorial Hermann Hospital in the Texas Medical Center (TMC) had resected what they could of a grapefruit-sized mass in his left temporal lobe, the area responsible for speech and motor skills.

The diagnosis proved grim: a 7-centimeter glioblastoma tumor with an average survival timeline of 15 months. He was informed of the prognosis a few weeks later, once the holidays passed. “I was a mess. It was like, ‘Wait! I’m going to die in a year or two?’”

Life, as Muhmel knew it, slammed full tilt into a brick wall.

“I was with Stratton’s family at the hospital after he fell, and I heard about the diagnosis,” said Sergio David ’17, a close friend and former roommate of Muhmel’s. “I wanted to help—to do something, anything.”

David casually mentioned the diagnosis to a fellow student, Alexandra Baskin ’20, who had met Muhmel once. Coincidentally, she knew all about glioblastomas, albeit from a different perspective.

“Glioblastomas are awful, ugly tumors with masses of octopus-writhing cells,” explained Alexandra, who worked several summers in a biomedical research lab at TMC’s Houston Methodist Hospital, studying ways to stop or slow the spread of glioblastomas. Some of her lab work was applied to independent research credit toward her Bachelor of Science in Marine Biology.

As fate would have it, Alexandra’s father is Houston Methodist Hospital neurosurgeon David Baskin, director of the hospital’s Kenneth R. Peak Brain & Pituitary Treatment Center. He stalks nasty glioblastomas like a hunter after prey. His weapon? A novel gene therapy that kills it, then mounts a long-lasting vaccine against it.

“If you hear that any of your Aggie brothers or sisters are hurting in any way and you can do anything to change that, you do it without question,” Alexandra said. “I told Sergio, ‘Look, I know it’s kind of a hopeless diagnosis sometimes, but there’s really good work being done that I know about and I have a personal ‘in’. It might be an option for Stratton, and you don’t get many with glioblastomas.’”

Muhmel met Baskin for a consultation on Jan. 9, 2019. “At the time Stratton saw me, he had a little bit of a residual tumor left,” recalled the neurosurgeon. “It’s the most malignant brain tumor you can ever get. They have these tendril-like fingers that go long distances in the brain, and you can’t really take all of it out. Standard treatment like surgery, radiation and chemotherapy doesn’t keep it away. They grow back fast. I told Stratton, ‘You’re young, so we want to throw the kitchen sink at this thing.’”

Baskin’s gene therapy utilizes a Trojan horse strategy. A tiny piece of DNA from a herpes virus is inserted into a genetically engineered, non-replicating common cold virus. The virus is then inserted into the tumor and taken up into the cancer cells. Patients are then given Valtrex, the oral medication used to treat herpes, which, similar to a heat-seeking missile, finds and attacks the herpes DNA. While doing so, it destroys the tumor cells’ DNA and kills the cells.

When the cancerous cells die, an immune response mounts, creating a vaccine against the tumor. “In some cases, it has continued to kill tumor cells for months and years later,” Baskin said, recounting a gene therapy patient who shows no sign of glioblastoma 13 years post-treatment.

Muhmel was kept awake for the operation to ensure no critical motor and speech areas were damaged, said the neurosurgeon who resected the tumor, then delivered 20 viral injections into his brain. “His tumor was right up against the main motor area of the brain and important speech fibers. It was relatively confined and had not spread into the fluid cavities of the brain, so we had the opportunity to make a nice, clean margin and then make injections into that margin. By the time it was over, Stratton had 500 billion viral particles cooking in there.”

A regimen of radiation and chemotherapy were also given. Now, a year and four months later, scans show no tumor growth. Muhmel will receive follow-up scans for the next several years.

Baskin joked that he knows a bit more about maritime administration and port security since performing the surgery. “We had his head cracked open and we’re rooting around in his brain and Stratton’s saying, ‘You know, there are a lot of new issues in maritime security these days,’ then tells me all about it. He’s got a lot of spunk, that’s for sure.”

Baskin meets plenty of enthusiastic Aggies as a Texas A&M adjunct professor of Medicine. “I teach Aggie EnMed medical students here at Methodist. We have Aggies working here in labs, in the operating rooms, all over. How Stratton found us, my daughter and all, that’s an Aggies helping Aggies kind of thing. That’s what Aggies are all about.”

To Muhmel, Aggie camaraderie takes on a whole new meaning.

"There was a time when I couldn't move forward in school or in life,' said the appreciative patient, who flashed a "Gig 'em" from his intensive care bed after surgery. Now, the 28-year-old is clebrating his graduation from the Texas A&M University Galveston Campus this month with a Master in Maritime Administration and Logistics, which was slightly delayed due to his dianosis and treatment. He also looks forward to marrying his fiancé Caroline Abbott ’13 and is applying to jobs in port operations.

“But challenges might come and it’s great knowing that my white blood cells will leap into action if cancer comes knocking at my brain again,” he said. “Without Sergio talking to Alexandra, I’d never have known about Dr. Baskin and this opportunity. I no longer worry about dying. I’m obsessed with living, 100%.” 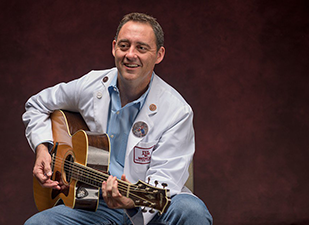