Rhett Butler ’22 has returned to school nearly 24 years after earning his degrees to become an oncologist as a way to honor his late brother.

What was it like growing up with a brother who had cancer?

When I was 8 years old, my 2-year-old brother, Ashley, was diagnosed with a brain tumor, but he did well against all expectations and survived. However, he was blind because of multiple surgeries he underwent, so I was his eyes, his social life and his closest friend in the whole world.

Life with Ashley was best described as a tetherball: When he was sick, the whole family was spinning around him, and everything was about overcoming that initial stressful moment. When he was in remission, the ball would spin away from the pole and we had room to breathe, but when he fell sick again, my job was to help take care of him. When he passed away in 2010, it was like someone cut the rope and the center of our family was gone. It’s a devastating thing for a family. Fortunately, my mother had a triumphant attitude through it all, and we rallied around that and made it the identity of our family. I learned about the necessity of hope and the value of never giving up.

HOW DID YOUR BROTHER’S JOURNEY INSPIRE YOU TO GO TO MEDICAL SCHOOL?

After my brother passed away, I was still immersed in the battle against cancer. I wasn’t ready to stop fighting, and I wanted to stay involved any way I could. The doctor who cared for my brother for 28 years told me that I should consider medical school because I had already learned so much about cancer. I told him I’d be 50 by the time I was ready to take care of people and he told me, “Well, you’ll be 50 anyway. The question is, what do you want to be doing when you’re 50?” That was the moment that I knew I wanted to return to school.

As a future doctor, my desire is to represent the family in the field of oncology. I spent so many years on the family side of the doctor-patient relationship that I feel I have a clear understanding of what patients and families want from their cancer doctor. It’s more than empathy; it’s about having experienced both indescribable victories and life-shattering disappointments.

You have interests outside of medicine, such as music. What was it like performing as a solo guitarist?

I grew up wanting to be Eddie Van Halen, so I asked for a guitar when I was 12 and my parents couldn’t get me to turn it off. It was an outlet for me; I just practiced in my room and created a connection with the guitar. I never had a desire to play with other people early on, so I devised ways to play so I didn’t need a band or other musicians. After I graduated from the University of North Texas, I worked part-time during the day as a teacher and played gigs at coffee shops to try to get my music career off the ground. In 2003, I opened a concert for a famous guitar player named Eric Johnson, and that’s when things started opening up to me. I’ve played all over the United States and in Europe. I got to live out the fantasy I had when I was 12; it was a dream come true.

How have the Dr. Craig Clanton ’82 Memorial Scholarship and the Ethan Hallmark Scholarship impacted your life?

The scholarships have been a blessing to me and my family. As a non-traditional student, getting accepted into the Texas A&M College of Medicine is not easy and requires a huge commitment and sacrifices from everyone in the family. To have received such support really validates our efforts. I have not met the donors, but I have corresponded by email and hope to have the opportunity to thank them in person one day.

How do you balance school, family and music?

I have to be very intentional about not only finding time to play my guitar, but also about finding time to spend with my family, because if I’m not careful, all of that time will be eaten up too. I set aside two to three hours per day to spend with my sons, Owen (8) and Clark (5), because I don’t want to miss anything they accomplish. I’ve decided it’s okay if I have to stay up late to study so I don’t lose time with them during the day. I want to set an example about how far you have to be willing to go for your family, and that’s what becoming a doctor is all about for me.

What has it been like going back to school after 24 years?

It’s difficult because I’ve already established myself in one part of life where I am respected, and people look to me for inspiration in that field. Then, I entered a new field and had to start at the bottom again. That transition is hard to do for everyone. My plan was to dive in and use that Butler mentality—the one that says if I decide to do something, I’m going to see it through and make it happen.

My parents and family, especially my wife, Nicole, have been very supportive, and they want to see me finish the race. My son, Clark, has picked up on the lingo and procedures when I practice being a doctor and knows all of the mannerisms. He’s 5 years old, and he can do a physical exam! Family support is crucial for me during this journey, so choosing Texas A&M University, with its Aggie family and the core values, was one of the greatest decisions I ever made.

To help Aggies achieve their dream of becoming a doctor through an endowed scholarship, contact David Boggan '79 at (979) 436-0811 or dboggan@txamfoundation.com. 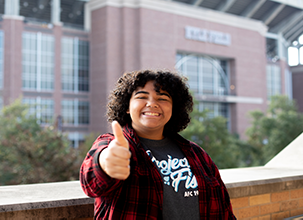 Out of Foster Care, Into CollegeRead more